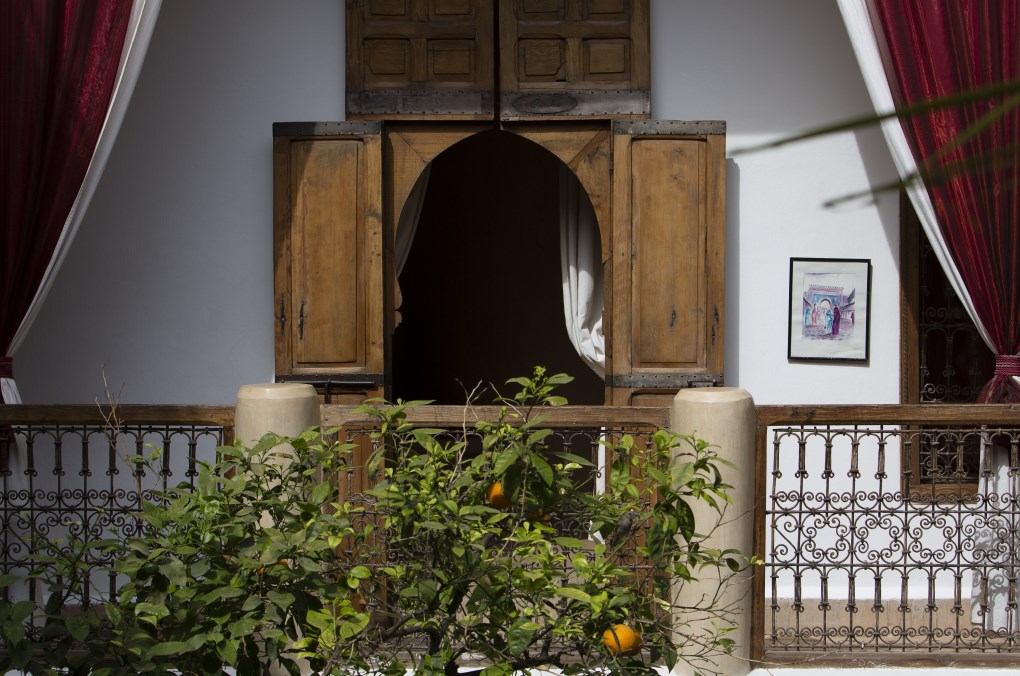 The Mouassine district is a popular neighbourhood set in the heart of the ancient Medina in Marrakech. Best known for its impressive stately architecture, grand riads, important shrines and souks, this district is perhaps the most sought-after area to stay when visiting the beautiful city of Marrakech.

The Mouassine district dates back to the Saadian period (1510-1699) and is still today a relatively affluent area. The properties here reflect wealth and tend to be larger and more ornate than properties in the other districts in the Medina.

The Mouassine neighbourhood has a rich history and was once home to powerful royals and merchants. Previously known as the Houmat Abi Abidan district, this part of the city was renamed some time in the 16th century after a clan of Jewish settlers arrived in the area. Mouassine is derived from the Berber language – ‘Mass’ means dagger, ‘ssine’ means two. The name apparently comes from the skilled craftsmen once living here who made daggers.

The lively Mouassine neighbourhood is the main gateway to the souks, and is known for its small craft shops, chic décor boutiques, cool cafés and great restaurants. Some of the more upmarket shops here export their goods all over the world.

At the centre of the Mouassine district is the Mouassine mosque. It is one of the most remarkable mosques in the city. Allegedly the height of the tower was limited due to objections from the powerful over the privacy of neighbouring courtyards.

Unless you are a Muslim you will not be able to go inside, though it is still impressive to view from the outside. Throughout the city, mosques, zaouias (saint’s shrines) and cemeteries are not open to non-Muslims.

The fountain is part of the complex that includes the Mouassine Mosque, a library, a bathhouse for locals (hammam) and a madrasa (Islamic college). The fountain’s water actually comes from the Atlas Mountains, fed by underground channels that were created when the city was built in 1072.

Musée de Mouassine, located between the mosque and the fountain, is well worth a visit. The 17th century guesthouse displays a jewel of domestic Saadian architecture with painstakingly restored intricate cornices and painted woodwork. The museum holds a small collection of Berber artefacts and often has guest exhibitions.

The museum building was originally attached to the riad of a powerful family. In those days the rich and powerful never had guests staying in their own house with the family, but had a guesthouse dedicated to visitors.

Also in the Moussine district, and only recently opened to the public, is the beautiful Palais Dar el Bacha. The palace is extremely elegant and has a very serene atmosphere. The colourful, geometric tilework, painted ceilings and carved cedarwood showcases some of the finest craftsmanship on display in the city.

Last, but definitely not least, on the list of sights to see in the Mouassine neighbourhood is Le Jardin Secret. The origins of the complex date back to the Saadian Dynasty, more than four hundred years ago. Rebuilt in the mid-Nineteenth century and recently renovated and opened to the public, Le Jardin Secret is now a must-see attraction consisting of an elegant, ornate 19th-century palace complex, traditional Islamic gardens, a shop and a café.

There are lots of cafés and restaurants in the Moussine neighbourhood we would be happy to share our recommendations. See a list of some of our favourites in the Medina here.

Despite the Mouassine District being such a lively part of the Medina, our riad (Riad El Zohar) is tucked away on a quiet street. The tranquil position of our riad gives all of our guests a welcome break from the hustle and bustle of the souks, and the sometimes overwhelming, sights, smells and sounds of this mesmerising and evocative city.

Our courtyard pool is a real treat after a day’s sightseeing in the city and our roof terrace provides the perfect spot for some relaxation with wonderful views of the Medina. If you would like to know more about the Mouassine district, the Medina or staying at our Riad, get in touch. We’d love to hear from you. Our friendly team are always happy to help.